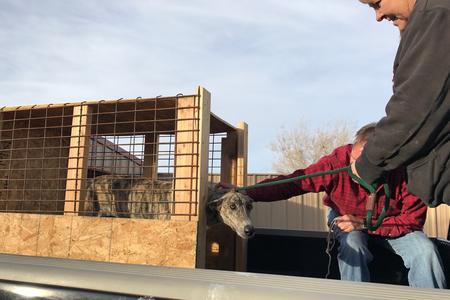 Once captured, Tory is happy to be petted and loves attention and affection. She has been very good on the leash and comes readily when called--she has not been skittish at the kennel. Tory is a bit reticent in new situations. We are being respectful of her past and what she has been through. What a remarkable rescue and the devotion that Mr. Yocham showed to a dog he encountered purely by chance--is the most remarkable aspect to this story! 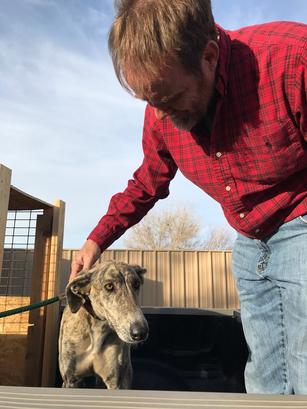 Colorado City, TX (Special Report)--The director of the local Greyhound adoption and rescue group in Lubbock received a phone call from a gentleman who had been feeding and watching over a female Greyhound that was on his oil lease in Mitchell County.

Todd Yocham had discovered her in April and at first he thought she was a deer! His attempts to catch her had been in vain--she would eat from his hand but not allow him to put a tether around her neck. Finally, on January 2nd, he captured her. She was transported to Lubbock and placed into the rescue kennel. Named Tory--for Victory or maybe Queen Victoria--what a wonderful and happy outcome.

Tory has moved into a foster home--she seems at ease with her foster family--is playful and discovering toys, soft beds, and romps in the yard. She is doing well on the leash walks, too. We are so happy and thrilled about the remarkable rescue of this lovely and regal hound! We have collected her DNA and the results are that she is:  37.5% Irish Wolfhound, 25% Borzoi, 12.5% Greyhound, 12.5 % Scottish Deerhound, and 12.5% mixed breed.  Tory is a Lurcher--or a Greyhound mix--she weighs 90 pounds! Her health is good--no infections from ticks or heartworm! She was treated for "worms".

UPDATE--Her new family think they will rename her Tiger Lily and have designated her birthday as March 17th. They were very amused that they contacted us to adopt a Greyhound and got a predominately Irish Wolfhound!

It goes without saying that Tory was one of the several dogs that was ruthlessly dumped in a remote area eight miles from Colorado City. She was no doubt, part of the pack of the dogs we took in during April--we are still so upset about this cruel and uncaring act. No one has any idea who dumped these precious dogs. To date, there were nine dogs that were left out there in April--including--Celeste, Bear, Cheyenne, Chelsea, Ivy, Duke, Coby, Tory, and another white male Wolfhound that was found in Lorraine, TX and re-homed by the person that rescued him.

Tory out loose on the oil lease 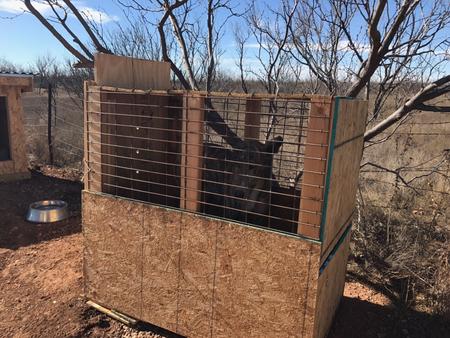 He also constructed this humane trap for her 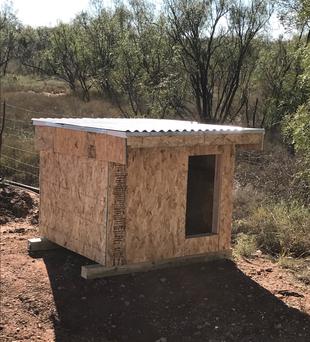 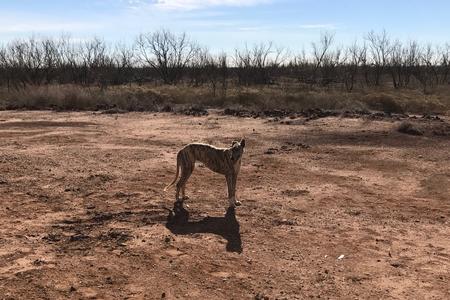 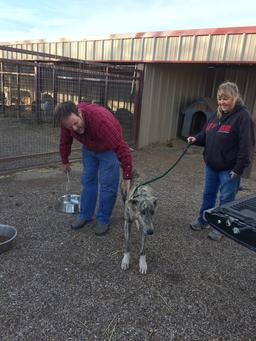