Here's another fun idea. Rent the movie--"Mrs. Brown-You've got a Lovely Daughter". This British movie was released in 1968. It stars the British pop group-Herman's Hermits and yep, features a Greyhound. I won't spoil the plot and ending--but it does relate to the DNA study.

We're excited to share the results of this study that is based on Lurchers that were under the group's care during the past several years....

Over the past three years, A Place for Us Greyhound Rescue (APFUGR) has collected an impressive number of DNA tests to determine the dogs’ backgrounds and heritage. There were several reasons that the tests were done including: were the dogs predominately (>50%) Sighthound, what other breeds might account for the dog’s differing traits and appearances, and were there regional variances?

Description of study group. APFUGR started conducting DNA tests in 2017 and this study includes all of them--fifty-nine tests (n=59). Two dogs were not calculated in the final statistics because their backgrounds were less than 50% sighthound. Both dogs that did not meet criteria originated in Lubbock. One dog was rescued off the streets of Lubbock and in poor shape. Ranger was thin, tall, and had markings that are often found with Greyhounds-white with brindle patches. Another young male dog (Gabriel) was noticed at the shelter and he had traits that were suggestive of a Saluki-tall and long-boned. Interestingly enough—Gabriel and Ranger had both had pediatric neuters done prior to their rescue. Large breeds of dogs that have pediatric neuters or spays often experience weird growth patterns of their long bones that can alter their appearance. The overall number of dogs that were tested is fifty-nine. It is estimated that 90% of the dogs rescued during the past three years had DNA tests done. DNA tests were submitted for rescued dogs that were not tattooed (tattooed Greyhounds are full-blooded and registered with the National Greyhound Association) and they were rescued from shelters and found loose as strays. DNA tests were all done via the Wisdom DNA panel.

To answer the question of—Were the dogs predominately Sighthounds? The statistics are very favorable since only two dogs or 3.3% of the total(n=59) were not predominately Sighthound. This is quite remarkable since current studies show that only 25% of dogs’ breeds can be identified by their appearance. APFUGR gets a particularly good score in this category. The group’s score is surpassed by the gentleman that is Tulia’s animal control officer—he scored a perfect score of 100%, based on the dogs he sent to rescue from his shelter. There were twenty-one dogs from Tulia that were non-tattooed and DNA-verified as predominately sighthound.

To answer the question of other breeds of Sighthounds that were identified by DNA tests, the study looked at the dogs’ percentages of various breeds as well as the family tree portion of each DNA test results. A resounding 70% of the dogs were predominately Greyhound. Saluki was dominate in 10.5% of the dogs tested and Borzoi was dominate in 5.2% of the dogs. Additional types of Sighthounds noted included: Irish Wolfhound, Whippet, Ibizan, Afghan, Rhodesian Ridgeback, and Scottish Deerhound. Twenty-five percent of the dogs in the study had one parent that was a full-blooded Greyhound. One of the dogs rescued from Tulia (Dora) was not tattooed, yet both of her parents were full-blooded Greyhounds.

Were there regional variances? The dogs rescued from “the big country”—Abilene, Blackwell, San Angelo, and Mitchell County were more likely to feature larger breeds of sighthounds such as Irish Wolfhound, Scottish Deerhound, or Borzoi. They were also more likely to feature non-sighthound breeds that were larger such as Mastiff, American Staffordshire Terrier, Airedale Terrier, and American Bulldog. The explanation for the larger breeds of sighthounds and miscellaneous breeds could be that the dogs were being bred to hunt wild pigs. Most of the dogs in the study originated from Lubbock (n=20) and Tulia (n=21).

Additional considerations
The study determined a significant number of the rescued dogs had a full-blooded Greyhound parent (twenty-five percent). Since 2017, the group has rescued twelve Greyhounds from perilous situations that were tattooed (four from animal shelters, five found as strays, three relinquished from hunters). This is a troubling finding and as the racetracks close and breeders go out of business—these numbers will escalate.

The group is doing a good job of determining which dogs are sighthounds. This study confirms that and establishes the importance of ongoing surveillance to be sure that dogs taken into the adoption program are sighthounds. Resources are scarce and vigilance with intake of dogs is of the utmost importance to guarantee that the group stays solvent and successful. The group plans to continue to test the DNA of dogs if possible. This information is a huge bonus to the dog’s adoptive family, helps confirm that the dog is truly a sighthound, and gives each dog its own unique identity. 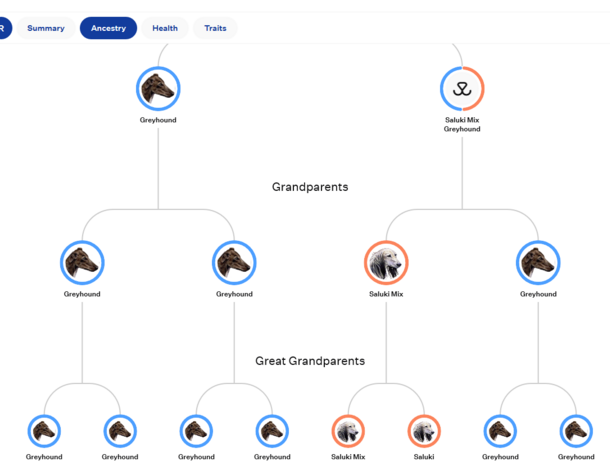 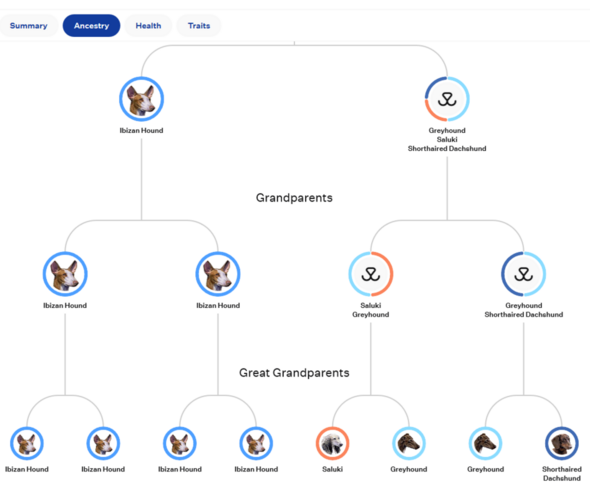 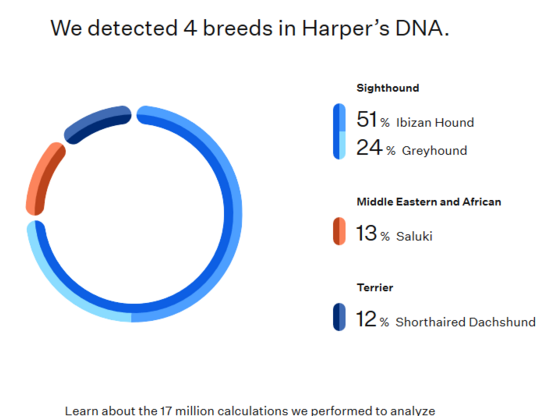 Compare the DNA results and family trees for Ringo and Harper--Do you think they are related?? 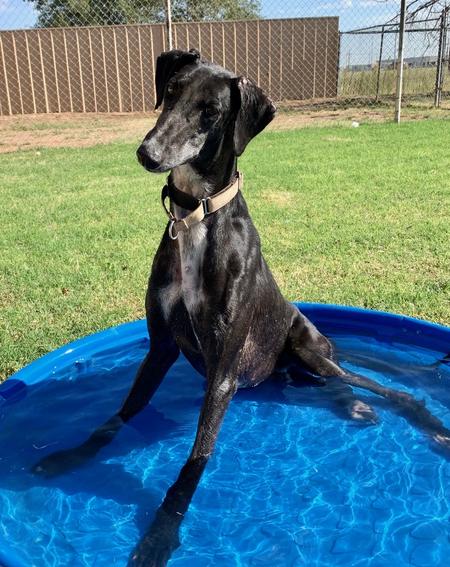 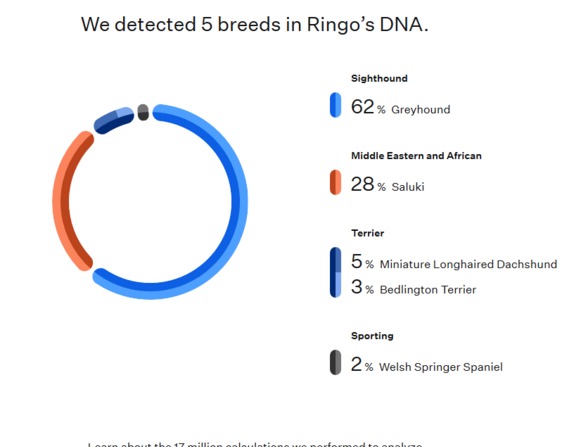 Follow this link to learn more about the group's early history regarding rescuing Lurchers...

Well, their left ears look alike! LOL. Also, it's not uncommon for a dog's litter to have several different sires--especially in a pack situation. Both Ringo and Harper were from the Tulia Animal Shelter. Ringo arrived in June and Harper arrived in October. 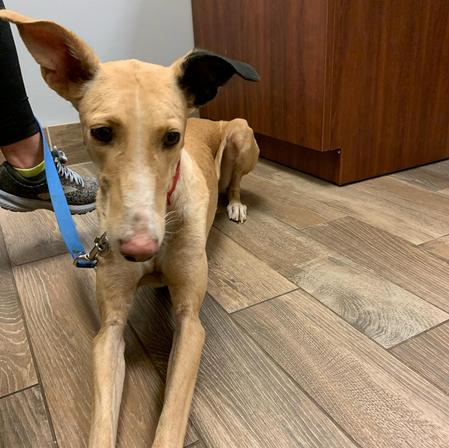 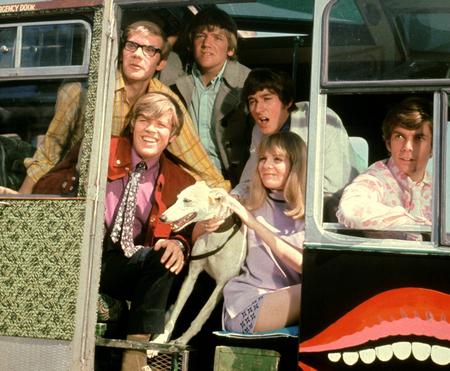